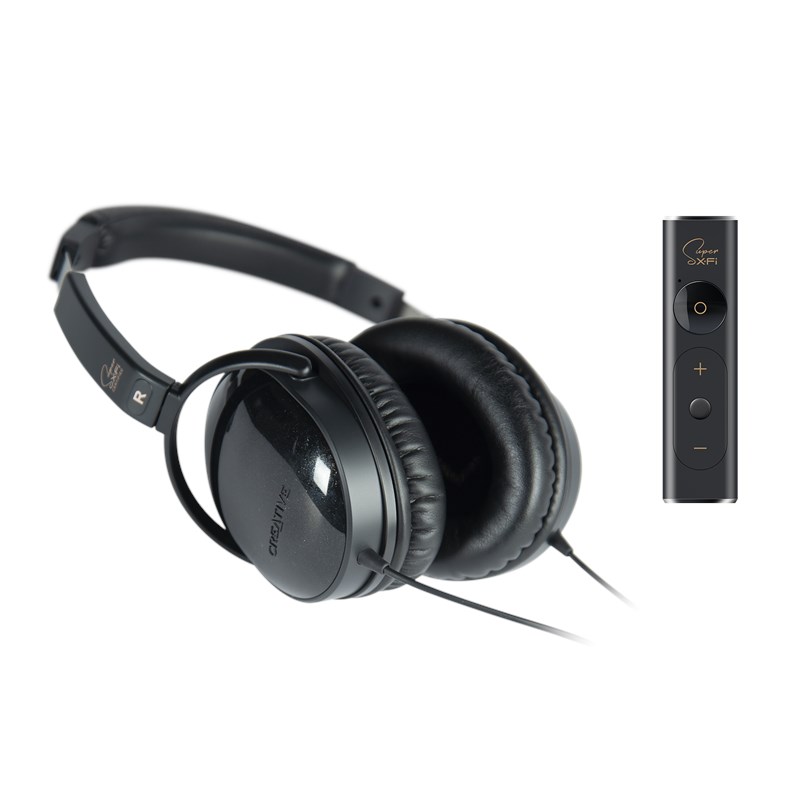 The SXFI® AMP delivers the best of two worlds in advanced personalized headphone audio.
It incorporates the award-winning Super X-Fi technology which is miniaturized into a dongle no larger than a finger. Simply connect the SXFI AMP to a USB device such as your PC or Android devices, and plug your 3.5mm headphones or earphones into the AMP, and you're all set. The SXFI AMP is also a premium high-performance headphone amplifier that is capable of driving even studio-grade headphones.

HOLOGRAPHIC AUDIO — UNIQUE TO YOU, PERSONALIZED FOR YOU.

Super X-Fi captures the listening experience of a high-end multi-speaker system in a professional studio, and recreates the same expansive experience — with the same original depth, detail, realism, and immersiveness — in your headphones.

Each of us hears the world differently — our unique head and ear shapes affects how we perceive sound. Super X-Fi personalizes the headphone audio experience based on how you hear sound to give you the most optimized and realistic listening experience.

This is done by simply taking three photos of your face and ears with your phone.

What the F***?!! . . . It was really something else I think, all of us, there was a collective gasp when the technology was demonstrated to us . . . its feels like big leap forward

The device also made straightforward stereo music tracks sound MAGICAL, as if you were in the room with the musicians playing live.

I had a listen and was left amazed. Super X-Fi showed a lot of promise.

(Using Super X-Fi) I heard game clips and it was insanely effective. INSANE.

.. no one in the industry could solve this decade's-long problem. Creative's Super X-Fi could be the game changer.

Hands down, this was the best demo of CES—and it's the product I'm most looking forward to reviewing this year.

Creative has the demo to beat at this year's CES. The company is showing an early prototype of a product it calls Super X-Fi Headphone Audio. And it blew my mind.

Creative ... looks to have finally cracked the issue of fitting full sized speakers into a pair of portable cans... I heard it through the earphones in exactly the same way I heard it via the speakers, and it was nothing short of AMAZING.

To bring this to a dongle that would just work with any headphones and be super affordable, that's really the HOLY GRAIL of headphone processing technology.

It was an amazing experience totally! I've been in the business for 40 years, and that's some of the best sound I've heard. And for the price point you're going to sell it for, IT'S OBSCENE.

Well the fact that it's going to be everyone's hands, you know, a product that everyone can afford, and it's something that is literally going to change the way people listen to things by that one little dongle.

For a while there, I actually thought that the speakers were on, and that there was nothing coming through both cans, until I took them off to hear nothing emanating from the speakers.

This Holographic-Sound Headphone Dongle BLEW MY MIND. This mind-blowing audio technology uses acoustic mapping and holographic sound to create a headphone experience that's nearly indistinguishable from what you'd get out of a dedicated set of surround speakers.

You can take the headphones off, listening to again; a three— or four—thousand Dolby Atmos system, and put the headphones on, and it will sound just as good. In fact for my ears, I gotta say, it sounded better.

I listened to the demo and it was MIND-BLOWING! The surround sound I heard from the headphone was amazing and I even took the headphones off just to confirm that I wasn't hearing the sound from the physical surround speakers. Judging from the guests' reactions, they were equally or almost as impressed as I am.

If you're curious about what ‘audio holography' is, Creative Labs has the goods with its Super X-Fi technology. I gave it a good listen at CES 2018, and it sounded glorious! After hearing the results, I was simply blown away. Even with all the audio products I've tested over the years, my ears were never subjected to anything quite like this.

During the audition, the Super X-Fi system created a realistic sense of space as I listened to a soundtrack. It took the audio that would have been usually stuck between my ears and projected “outside” the confines of my head. I was able to pinpoint the sound sources in a room as well as gauge the distance between them.

I know, it's unbelievable that the little ‘dongle' above can give you sound as good as a 5.1 Dolby Digital Surround System (Dolby Atmos 5.1.2) but it absolutely does!

As an audio engineer I readily claim that most ‘virtual' surround sound applications are junk - until now. Creative Lab's Super X-Fi blew me away.

What impresses me the most is how Super X-Fi managed to turn a standard 2.0 music track into a realistic live surround effect. It is done so well that it's as if the artist is singing RIGHT IN FRONT OF ME.

Features At A Glance

Ultra-portable, no larger than a finger and only weighing 15g.

Delivers 3x amplification gain and supports headphones with high impedances of up to 600ohms for powerful audio performance.

Whether you are watching movies, listening to music or gaming, immerse yourself in a holographic audio experience wherever you are.

Lightweight and ergonomically designed, the Creative Aurvana SE is extremely comfortable and easy to bring around. The drivers within are tuned by our acoustic experts, and it delivers a natural and faithful audio presentation akin to a live performance. The sharp transients and dynamic passages are handled with effortless finesse, and brings out the vibrancy in your music playback for a realistic music listening experience.

If you own a Creative SXFI AMP, Aurvana SE is also Super X-Fi certified for use with Super X-Fi for the best headphone holography audio experience.

Immerse in your music for hours with Aurvana SE and stay comfortable throughout the entire duration! The closed-back around-ear headphone is designed to help reduce unwanted background noise; and with its soft leatherette earpads and adjustable padded headband, the Aurvana SE provides outstanding comfort for long-lasting wear.

Aurvana SE is Super X-Fi certified! Super X-Fi processing with certified headphones accounts and compensates for changes in audio output caused by the headphones to ensure audio reaches your ears as intended.

Any headphones that feature our Super X-Fi Certified badge has been optimized for use with Super X-Fi.

The technology is impossible to miss. It’s not subtle like the jump from 1080p to 4K. It makes audio sound more natural and more like it’s in the world with you.

It’s like sitting in a room with a high quality surround sound system: watching movies on the train will never be the same. I got highly accurate left/right and front/back definition of sound sources in a coherent and believable fashion. From this view, SXFI is a hit.

Super X-Fi is stunning. The technology is impossible to miss. It’s not subtle like the jump from 1080p to 4K. It makes audio sound more natural and more like it’s in the world with you.

In the end, there’s not much you can read about that will recreate the experience in real life. You have to hear it in real life to really understand what we’re talking about here...Super X-Fi is a fantastic technology that’s a perfect add-on for any audiophile and music enthusiast that wants to extract the most out of any pair of headphones.

While the setup is a little unwieldy the result is astounding. The Super X-Fi does a great job. Creative’s holographic audio is something else. Holographic audio is comparable to custom-built surround sound algorithms. While the Super X-Fi still manages the same directional audio as standard headphone surround, it makes Dolby and competitors just sound flat. Hook the Super X-Fi up to a game or film and holographic audio blows open the surrounding soundscape. There is an obvious sense of depth to any audio experience with the Creative SXFi that is simply immersive. The difference is hard to put into words but try out the Super X-Fi and suddenly you’ll realize how planar your existing audio is.

This little bit of kit works wonders for even the most average of headsets. I know it’s very difficult explain how great something sounds, but trust me, the Super X-Fi is another game changer from Creative.

Overall though, whether you cotton to the “audio holography” term or not, there’s no mistaking that Creative has done something impressive here. The surround sound experience they’ve been able to deliver is simply one of the best out there to date.

This device is highly recommended in my books if you're looking for a more immersive personal listening experience at an affordable price.

Absolutely amazing sound quality out of this amp. I thought Gen1 was good enough but Gen2 impressed me even further. Together with the Aurvana Trio, it brings fantastic listening experiences!

I was very skeptical about this product for months. I finally purchased one during an online sale, along with a purchase-with-purchase offer for the Aurvana Live! SE headphones. I must say I am very proud of Singapore's Creative Labs for this technological breakthrough in holographic sound. Be blown away by Sxfi difference!

FAST DELIVERY AND CREATIVE Live Chat is very prompt with their service enquiry., thumb up!

I have just received my Super X-Fi Amp and I would like to thank everyone at creative for this, its Absolutely Amazing I have always said when it comes to sound creative is the Bugatti of them all love this new addition wow wow wow thank you so much 5stars.

I use Aurvana Live! SE with GC7 and am so glad with my purchase. I did not know that SXFI technology will be so immersive and so mesmerizing. I have been spoiled by the SXFI tech. Movies, Music and Games all come alive and sound super amazing, just the way they were meant to sound by the artists and the engineers. Thank you, awesome folks at Creative!. 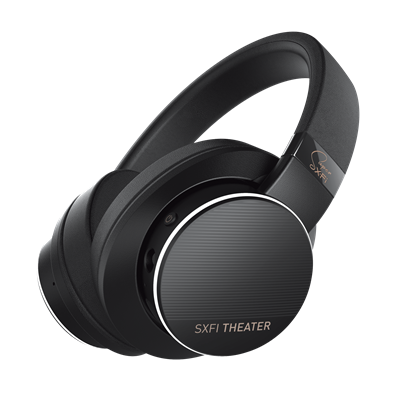